For the Bhandara Zilla Parishad election, the Congress has teamed up with the BJP. 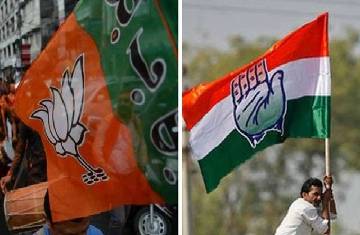 The Congress partnered with the opposition BJP in Bhandara district for Zilla Parishad elections, breaking Maha Vikas Aghadi's ally code. The Nationalist Congress Party, which is one of the current Maha Vikas Aghadi government's allies in Maharashtra along with Shiv Sena and NCP, seems to have been overlooked in the elections for chairman and vice chairman of Bhandara ZP.
According to a Maharashtra Times article, the coalition between the two parties has given Congress the chairmanship and the BJP the vice-presidential seat, keeping the NCP out. Gangadhar Jibhakate of the Congress was chosen chairman, and Sandeep Tale of the BJP was elected vice-chairman.
The Congress gained 21 seats in the 52-member Zilla Parishad, the BJP 12 seats, and the NCP 13 seats. There are three independents, one Shiv Sena, one deprived seat, and one BSP seat. The Congress party, having gained 21 seats in the Zilla Parishad, was a strong contender with a magic number of 27.
As the election for Bhandara Zilla Parishad president began, two groups within the BJP began to emerge. Charan Waghmare has 5 members despite the fact that 12 members won. whereas, despite having seven members, Parineet Phuke's organisation proved ineffectual. Waghmare teamed up with the Congress and received 27 votes, plus one more.
It was widely assumed that the Congress would take power alongside its traditional ally, the NCP. However, everything changed in the Panchayat Samiti elections. To punish an injustice done to it in the past, the NCP teamed up with the BJP, leaving the Congress alone in the district.
Image Courtesy: Twitter @nustamemes7