For pothole complaints, the BMC will publish the phone numbers of its local ward engineers and MMRDA officers 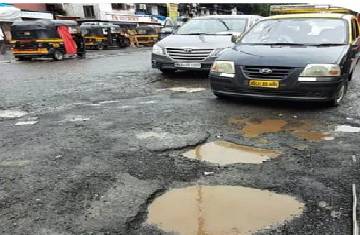 Every year, the BMC publishes the phone numbers of its local ward engineers so that citizens can register complaints about potholes. Along with the BMC engineers, the BMC will publish the numbers of MMRDA officers this year. Every year, the BMC has been blamed for the potholes. As a result, the BMC has decided to publish the phone numbers of MMRDA nodal officers.
According to the BMC, all roads are not under their jurisdiction. MMRDA is responsible for filling potholes on the Western Express Highway and the Eastern Express Highway during the monsoon season. The BMC spends thousands of crores of rupees on road construction and repair. Potholes continue to appear on Mumbai's roads. To address the issue of potholes, the BMC has begun road concretisation.
Even so, many asphalt roads have potholes during the monsoon season. BMC filled 40 thousand potholes in Mumbai last year. Following the high court order, the BMC established a mechanism to register complaints. To register complaints, a mobile app, toll-free number, and the phone numbers of local ward engineers are being made available. BMC publicised their engineers' phone numbers in newspapers, on billboards, on their website, and at ward offices.
MMRDA, MHADA, and BPT roads exist in Mumbai, but only BMC is targeted for potholes. Citizens also complained about these roads on social media and targeted the BMC. A few years ago, BMC put up banners indicating which government agency owned which road, but this year BMC decided to display the number of MMRDA Nodal officers.
"Every year, the BMC publishes its engineers' phone numbers in order to track down pothole complaints. MMRDA has also submitted a list of their engineers' and nodal officers' names and phone numbers on the same basis. We welcome the relocation. It will aid in the resolution of the city's pothole problem "MMRDA was added.
Last year, the Mumbai BMC filled 40 thousand potholes. Ward offices requested 3000 metric tonnes of the cold mix this year. According to BMC officials, 1415 metric tonnes of cold mix mixture were distributed to all 24 administrative wards of Mumbai this year to fill potholes.
Image Courtesy: Twitter @EmergingMedia17