Colleges to reopen from October 20, fully vaccinated students to be allowed 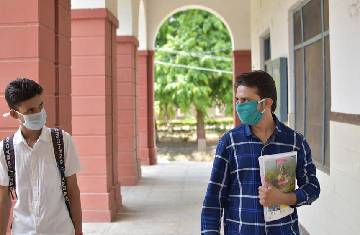 The Maharashtra Government led by Chief Minister Uddhav Thackeray, after being in a confused state of mind, finally decided to reopen colleges from 20 October for degree colleges. The physical classes will be operating after more than one and a half years of being present virtually by the students.
This announcement came from the Higher and Technical Education Minister Uday Samant on Wednesday, stating that all the students who have been vaccinated fully can attend physical classes starting from October 20th. The students who are below the age group of 18 years, for them vaccine would not be mandatory, stated the state Government’s resolution.
Though the decision for resuming colleges has been taken by the state government stating that colleges in the state can reopen the colleges with 50 percent capacity or even more but the Brihanmumbai Municipal Corporation (BMC) in Mumbai is yet to take the decision, the reason being the mode of transportation which is the local train for many students, for this the state of Maharashtra will have to file written permission for allowing students under the age group of 18 to travel from local trains.
Though the permission for physical classes in the city has been given for the students from 8 to 12 classes. “The areas where the Covid cases can be seen declining the University administration can call more than 50 percent students in the campus for physical classes starting from October 20 and the regions where the Covid 19 cases are high and increasing each day, the decision of  resumption of physical classes in these areas should be taken by the local administration of that area,” stated Higher and Technical Education Minister Uday Samant.