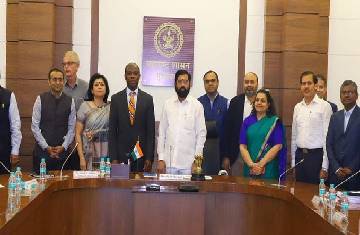 Eknath Shinde, Chief Minister of Maharashtra, asked the World Bank on Thursday for financial support for an ambitious project to divert flood water to drought-prone areas in an effort to stop farmer suicides in the Vidarbha and Marathwada regions. This comes amid an increase in farmer suicides and growing distress among them. At their meeting with World Bank India Director Auguste Tano Kouamé, the CM made the case. The Maharashtra Skill Development Project, climate change and its effects on the agricultural sector, the Balasaheb Thackeray Agri-Business and Rural Transformation Smart Project, and Electric Buses for BEST were all thoroughly discussed during the conference that was conducted today.
The state government has started a large-scale operation to redirect floodwaters from western Maharashtra to areas suffering from drought. This project will result in the irrigation of thousands of hectares of land and the production of drinking water. Due to the positive effects on agriculture, efforts will be made to stop farmer suicides. For this project, the World Bank ought to collaborate," said Mr. Shinde.
According to Mr. Shinde, Maharashtra is undergoing development efforts with financial support from the World Bank, which is assisting in capacity building. He urged the World Bank head to assist future projects in the state's diverse sectors in a similar way. Eknath Shinde, Chief Minister of Maharashtra, visits a temple to inquire about his future; critics.
Image Courtesy: Twitter @fpjindia