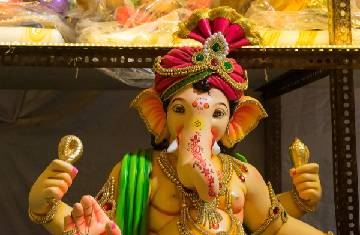 From the start of the following year, the BMC will institute a ban on plaster of Paris (POP) idols in accordance with the Central Pollution Control Board's (CPCB) regulations. The BMC has therefore called a conference to raise awareness among idol creators. The city authorities should offer suggestions as to how hazardous chemicals might be replaced with eco-friendly materials rather than simply enacting a general prohibition, according to the idol manufacturers.
Guidelines were released by the CPCB in May 2020 that forbade POP idols, which are thought to be the source of water body pollution. However, the sudden ban will negatively impact idol makers' livelihoods, thus it was postponed to a year at their request. Despite the fact that this year's Ganeshotsav was celebrated following two years of Covid-19 restrictions, the BMC made an exception and permitted the purchase and sale of POP idols. The city government has chosen to discuss the prohibition with the idol makers and explain its significance to them before putting it into effect.
Ramakant Biradar, a Deputy Municipal Commissioner, stated, "We are working on the ban in advance because the idol makers start their work a few months early. We've scheduled a meeting for next month to talk about the ban and to present the rules. Additionally, we are gathering information from the 24 administrative wards of the city regarding the number of POP idols submerged this year.
According to BMC sources, the Maharashtra Pollution Control Board (MPCB) and the National Environmental Engineering Research Institute (NEERI) have been asked for recommendations on alternatives to POP. However, the haste with which local officials implemented the ban before providing any alternatives angered the idol makers and sarvajanik Ganeshotsav mandals.
Brihanmumbai Sarvajanik Ganeshotsav Samanvay Samiti (BSGSS) President Naresh Dahibavkar stated, "The ban cannot be implemented without providing any alternatives. To investigate solutions to substitute dangerous chemicals from POP with organic material, a committee was established. The details of what followed have not been disclosed yet.
Shri Ganesh Murtikar Kamgar Sanghatana chairman Prashant Desai stated, "We are not against the prohibition, but 98 percent of idols are made of POP. Therefore, the BMC should adopt it gradually. The state's biggest celebration is Ganeshotsav. Without conducting any investigation, the BMC is attempting to enact the prohibition. Will the BMC outlaw the usage of POP everywhere since it is not only used for idols? Clay is not a good alternative because it requires a lot of drying time and room for constructing idols.
Additionally, paper idols are not sustainable, whereas fibre or clay idols are more expensive than POP. Before enforcing the ban, the civic organisation should conduct a thorough investigation. There aren't any figures accessible, though. 1,93,062 sarvajanik and domestic Ganesh idols were submerged in both constructed lakes and natural water bodies this year by the city. According to the idol makers, the POP is difficult to dissolve in water; little Ganesh idols take 7-8 hours, and large idols require several days.
Image Courtesy: Twitter @agarwalsonika7