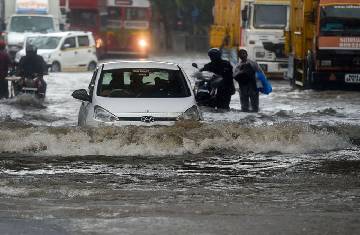 Following Tuesday morning's heavy showers, waterlogging caused traffic disruptions at the Andheri metro. The BMC has started an 18-month project to enlarge the sewers in Andheri (West) for an estimated cost of Rs 100 crore with the aim of providing relief to the flooding area.
The BMC built pumping stations at eight different locations to stop flooding after the 2005 disaster. Accordingly, the Mogra nullah pumping station would have helped relieve the water logging that occurs during the monsoon in places like Andheri, Versova, Jogeshwari, and Oshiwara. The pumping station, however, is still only on paper.
In the meantime, the BMC officials continued their microplanning in 2019 to address floods at each troublesome location. Accordingly, the actions done at areas that experienced heavy flooding, such as Hindmata in Dadar and Gandhi Market in Sion, are said to have provided respite for the populace this year. To avoid floods at the Milan Subway, work is being done on building an underground water tank. While work on a second flooding issue at the Andheri Metro is anticipated to begin following the rain.
The Andheri subway had to be closed for vehicular traffic on numerous times after the monsoon arrived this year owing to water logging. "We have six dewatering pumps at the location, but despite the nullah's proximity to the subway, the slope gradient is higher on the eastern side. There isn't enough room in the stormwater drain on the western side to accommodate larger amounts of water at once. Therefore, the subway floods after every rain, according to a representative of BMC's storm water drainage division.
Image Courtesy: Twitter @themaktab