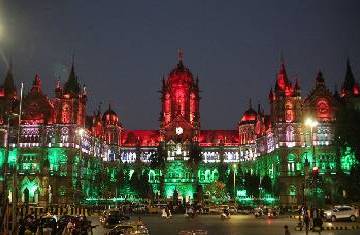 As part of the Azadi Ka Amrit Mahotsav, or the celebration of the 75th Anniversary of Independence, several areas of South Mumbai will be bathed in the colours of the national flag from August 13 through August 15. This is accomplished by the BMC and various public and private authorities lighting heritage buildings and precincts.
Lighting has been installed in places like Shivaji Park and Chaityabhoomi as well as buildings like Mumbai University, the Life Insurance Corporation of India's Yogakshema building, the Chhatrapati Shivaji Maharaj Vastu Sangrahalaya (formerly the Prince of Wales Museum), the Jehangir Art Gallery, the RBI headquarters, the Asiatic Library and the Gateway of India.
Residents have also been urged by the company to install facade lighting on their properties. The national Tricolor is also being distributed to the populace. Azadi Ka Amrit Mahotsav was to be observed throughout all of India's States and Municipal Corporations on the nation's 75th Anniversary of Independence.
Ashish Sharma, an Additional Municipal Commissioner in charge of the BMC's "Har Ghar Tiranga" campaign, stated: "Citizens and business sectors are responding favourably, and many are making monetary contributions. Some businesses provide flags and ornamental items using CSR funds."
According to Sharma, the Union Government temporarily loosened the Flag Code. However, he urged people to save the flag as a reminder of the diamond jubilee and use it again the next year. "People won't purchase the flag if we aggressively enforce the Flag Code."
Up to 35 lakh flags have been purchased by the BMC, who will distribute them until August 11. According to a senior official, the company would also distribute flags in slum areas. Schools and institutions have received soft copies of the Azadi Ka Amrut Mahotsav and Har Ghar Tiranga logos from the BMC so they can print and display them on their structures.
Image Courtesy: Twitter @themaktab