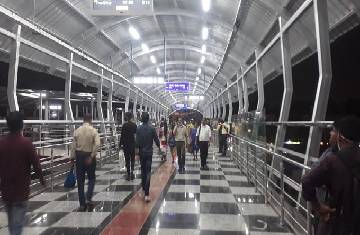 The BMC vigilance department's inspection revealed that the Marine Lines foot-over-bridge, which was built a few months ago by the bridges department, had subpar work done to it. It's interesting to note that the bridges department denied the accusations and suggested that boys using cricket bats to break tiles on the foot-over-bridge.
When a team of engineers from the vigilance department recently examined the bridge, they discovered that both the bridge and the stairway had broken, popped up, and missing tiles. "We conducted an inspection of the bridge and communicated our observations to higher authorities, and they will take action accordingly. We raised the flaws of the contractor. Now, the department concerned will take action according to conditions mentioned in the tender documents," said Vinod Chitore, chief engineer of the development plan and officer of the vigilance department, to FPJ.
Chitore continued, "During our inspection, we had noticed that tiles were broken out and slopes were not offered, which required to be given on the bridge to recede rain water. However, a bridges department officer disagreed, stating, "We can't say it is a substandard work. Boys who cross the bridge may have broken the tiles with their cricket bat, and some people even ride bicycles on the bridge, but we have replaced those tiles. Now, we are thinking of laying stamp concrete on the bridge."
He claimed that he had not yet received a vigilance report when asked what action he would take against the contractor. He would decide what to do about the contractor after he received the report. A foot-overbridge on the 90-foot road outside the east side of Marin lines station was deemed unsafe for rail users in 2019 after the Himalaya bridge collapsed. Thousands of citizens used this foot over bridge on a daily basis. BMC awarded the contract to build FOB in June 2019, but it wasn't finished until May 2022.
Image Courtesy: Twitter @AgadirGroup