Bal Thackeray-planted tree is destroyed by heavy rain, BMC authorities replanted it at the same spot 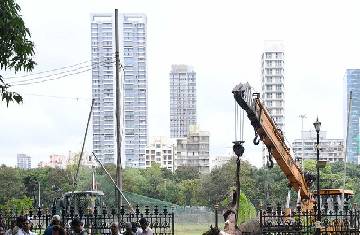 In Dadar's Shivaji Park, a Gulmohar tree that had been planted by late Shiv Sena founder Bal Thackeray was uprooted on Sunday late at night. The tree was placed near the Bal Thackeray memorial some 25 to 30 years ago, according to the BMC. Later, the local government had it replanted a short distance from the original location. The tree's branches were clipped on Sunday. The BMC promptly acted and replanted the tree.
Due to the impact of the tree fall, the memorial's grills, flooring, water pipe, and power cables have all been damaged. The Shiv Sena employees, who had a sentimental attachment to the tree, are uneasy following the incident. Former Mayor Kishori Pednekar and Sena Group leader in BMC Vishakha Raut hurried to the site as soon as they learned about the uprooting. "Tree falling events frequently happen during the rainy season, however, we have a close connection to this tree. We get energy from this tree," Pednekar stated.
Civic representatives also went to the location during this time to assess the situation. Given the significance of the tree, Assistant Municipal Commissioner Prashant Sapkale confirmed that the garden department had replanted it. A pit was dug, fertiliser-mixed dirt was applied to the tree's root system, and the tree was then put in the ground to fix it.
Image Courtesy: Twitter @fpjindia