After the demolition of Laburnum House caused tremors in Mani Bhavan, the BMC issued a stop-work notice 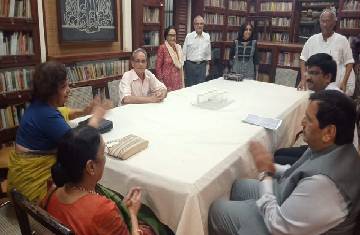 The demolition of Laburnum House, Laburnum Road, Gamdevi, which produced earthquakes in the nearby Grade 1 Heritage site Mani Bhavan, has been halted by the Brihanmumbai Municipal Corporation. From 1917 to 1934, Mahatma Gandhi resided in Mani Bhavan for 17 years. The Mahatma issued a Satyagraha plea in response to the Rowlatt Act, which restricted press freedom.
On Wednesday, Mani Bhavan's trustees and neighbourhood ward officials met with Mangala Prabhat Lodha, the Tourism Minister and local MLA. "There has been a one-week notice to cease work. In order to determine what is permitted and what is not, we have requested documentation from the Heritage Committee, approvals, and designs regarding the height and the basement. On Monday, we'll hold a review meeting "Lodha remarked.
"The developer has been requested to produce an IIT approach outlining how he intends to proceed with the job. They appeared to have obtained the Heritage Committee's approval to develop the site "According to Sharad Ughade, Assistant Municipal Commissioner for D Ward, which includes Mani Bhavan,
After the demolition of Laburnum House generated tremors and vibrations, Mani Bhavan and nearby residents voiced worries about safety. "Although the work began in July, it wasn't until the past 14 days when vibrations brought on by the usage of large machinery were felt. The fact that this is a heritage site and we are unsure of how the structure was destroyed is another worry we have "the executive secretary of the Mani Bhavan Gandhi Sangrahalaya, Meghshyam Ajgaonkar, said.
The proximity of this incident to the Grade 1 heritage structure—100 meters—is unexpected. Abha Narain Lambah, who is in charge of Mani Bhavan's restoration efforts, remarked that if the Heritage Committee genuinely approved, then the appropriate steps should be taken.
According to a source from the Heritage Department, the Mumbai Heritage Conservation Committee will issue a no-objection certificate if a structure within the heritage precinct is beyond repair and in need of repair. Additionally, the edifice shouldn't be an art deco or a well-known heritage building.
Image Courtesy: Twitter @themaktab