After failed talks with Congress, the Sena-NCP will run unopposed in the Goa elections 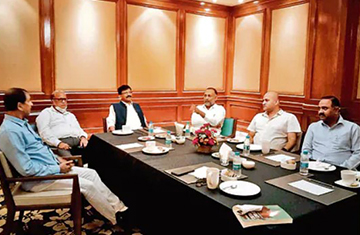 The Shiv Sena is girding its loins to contest the Goa assembly elections in an alliance with the Nationalist Congress Party after seat-sharing talks with the Congress fell through (NCP). On January 19, the two parties are expected to formalize their partnership for the coastal state, with the Sena potentially contesting 15 seats. Previously, the Shiv Sena had hoped to duplicate a Maharashtra Vikas Aghadi (MVA)-style experiment in Goa with the Congress and the Nationalist Congress Party to take on the ruling Bharatiya Janata Party (BJP).

The Shiv Sena's state unit president in Goa, Jitesh Kamat, claimed their talks with the Congress reached a snag over the number of seats to be split. "The Congress offered seats like Priol, Porvorim, Pernem, and Sanvordem, but we were anxious to contest from Mapusa and Siolim, where our workers had been active for the past five years," he explained. He claimed that Goa's politics focused around 10 to 12 individuals who frequently switched parties, were crooked and had ties to the land and drug mafias. According to Raut, the BJP recently inducted persons with ties to the drug cartel.

"We want the people of Goa to elect the people who are running for office." "We will put up candidates from the people," he said, noting that the late Shiv Sena chief Bal Thackeray had also offered people from the mass’s leadership opportunity. Raut further slammed Delhi Chief Minister Arvind Kejriwal for running door-to-door campaigns for the Aam Aadmi Party (AAP) in Goa while the number of Covid-19 cases in his state was on the rise. Considering Goa's proximity to Maharashtra and the two states' cultural and historical ties, the Shiv Sena has been unable to secure a political opening in the coastal state.