BJP would protest if Majiwada's civic work is not completed soon 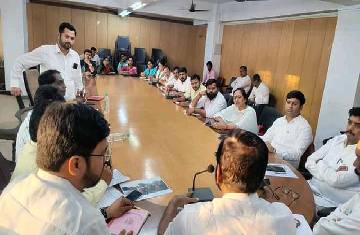 On Wednesday, Thane city MLA Sanjay Kelkar and local BJP leaders met with Thane Municipal Corporation (TMC) representatives of the Majiwada-Manpada ward office to discuss numerous unfinished projects in and around the Majiwada region. Sachin Shingare, a local BJP politician from Majiwada, brought attention to various unresolved concerns in the area, including the unkempt state of the restrooms in TMC schools and public areas and the neglect of the Majiwada cremation.
Kelkar ordered ward officers to take action against illegal buildings and banners in the region and raised concern over the rise in illegal hawkers on the roadways in Majiwada, Kolshet, and Manpada. "Since the breakup of the TMC last year, the civic authority has failed to offer fundamental services to local citizens. After their terms are over, local corporators vanish from view. After my assistance, the 9-month-old Kolshet road widening project was finally launched last week, he said, adding that the neighborhood's BPJ team has already made several trips there to address problems.
Additionally, Kelkar cautioned TMC officials to settle outstanding concerns as soon as possible or the BJP will protest the civic body. The MLA also requested that the TMC reopen the Nandibaba Mandir in Dhokali, which has been off-limits to the public for a number of days. The Majiwada area, which includes Majiwada, Balkum, Dhokali, Yashashwi Nagar, Kolshet, Highland, Dadlani Park, and Manpada, is one of the larger wards in Thane.
Image Courtesy: Twitter @themaktab