The BMC has launched a campaign to deliver quality and safe education to schoolchildren. 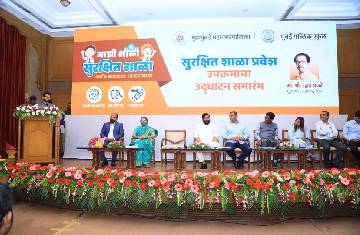 On Wednesday, the BMC launched the 'Safe Access to Schools' campaign in order to provide quality and safe education to schoolchildren. During the inaugural campaign, Aaditya Thackeray, Guardian Minister and Environment Minister, Eknath Shinde, Congress Leader Aslam Shaikh, and State Education Minister Varsha Gaikwad were present.
In his speech to the campaign, Thackeray stated, "There is a need for collaboration between security and educational excellence." Within a 500-metre radius of the school, every child should be able to move freely. Good pathways, street lighting, bus stops, and suitable traffic crossing arrangements are required for this." He also emphasised children's oral and emotional health.
"Every child who comes to school should receive dental, mental, and diabetes treatment," he stated." In government schools, all three criteria are taken into account. As a result, Mumbai is implementing the safe access campaign." There was a period when enrolment in BMC schools was drastically reduced, but that has changed, according to Thackeray, who added, "Now, many people are interested and standing in line to seek admission in the BMC schools."
Image Courtesy: Twitter @AUThackeray