MLA Ravi Rana believes the sedition allegation against them is sad 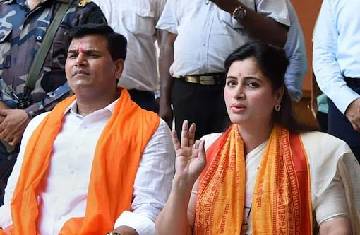 On Wednesday, Amravati MLA Ravi Rana said it's regrettable that CM Uddhav Thackeray has applied British-era sedition sections against individuals who wish to recite the Hanuman Chalisa. Rana further accused Mumbai Commissioner of Police Sanjay Pande of arresting him and his MP-wife Navneet Rana in order to satisfy the CM.
"Britishers used to impose sedition against freedom fighters," Rana claimed. We chose to chant Hanuman Chalisa to alleviate the problems associated with Hinduism, unemployment, and load shedding in Maharashtra. We were detained, though, and charged with sedition. We were imprisoned for 14 days. "I am grateful to the Supreme Court for granting a stay on such a charge."
On May 23, Navneet Rana will meet with Lok Sabha Chairman Om Birla to discuss her detention and the events surrounding it.
Ravi Rana also expressed his anger with the BMC's warning over his Khar flat. "We bought that flat with our hard-earned money," he explained, "but Uddhav Thackeray has numerous properties in Mumbai. "During the BMC election, I will speak at rallies."
Image Courtesy: Twitter @fpjindia