If shouting the names of Ram and Hanuman is considered a crime, be prepared to serve 14 years in prison: Navneet Rana 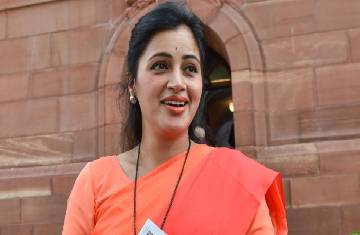 Navneet Rana, an independent MP from Amravati was arrested by Khar Police last month for threatening to recite the Hanuman Chalisa outside Chief Minister Uddhav Thackeray's private residence Matoshree, has challenged Thackeray to run against her in an election. She also said that Lord Ram and the people of Maharashtra' would punish him at the polls for the heinous abuse she received. Former Mayor Kishori Pednekar called Rana an "immature Babli" in response to this comment.
"What offense did I commit that I was put to jail?" Rana asked the journalists after being released from Lilavati Hospital on Sunday, clutching her Hanuman Chalisa book. If this government sentences me to 14 days in prison for chanting the names of Lord Ram and Hanuman, I am willing to serve 14 years. If the Shiv Sena believes that such efforts would silence me, they are mistaken.
This crusade will not be stopped by me. I challenge Uddhav Thackeray to run for office. If you run for office in any Maharashtra district, I will run against you, and the people of Maharashtra will respond appropriately. During the BMC election, I will also speak at anti-Shiv Sena rallies. In the approaching elections, we will burn this corrupt Lanka of the Shiv Sena-led BMC."
"I am asking the administration of Lilavati Hospital how they allowed cameras at the MRI centre where the patient was having treatment," former Mayor Kishori Pednekar retorted. We'll go tomorrow and ask the management questions. CM Uddhav Thackeray will not respond to persons like these who do not belong to a political party. We (Shivsainiks) are present to combat her. Just get on the field, and we'll see what happens."
"Navneet Rana is purposefully making such provocative statements to destabilize Mumbai," Pednekar added. She intends to incite rioting around the city. You have the right to speak in a democratic society, but it does not mean you can say anything. When you're a member of Parliament, you have to act like one. I assumed Babli had matured after her release from prison, but she is still immature."
Rana was transported to the Lilavati Hospital in Mumbai shortly after being released from Byculla Jail on May 5. The MP was seen being brought into one of the hospital rooms and then lying on a stretcher for a check-up on television and social media since she was unable to walk. Her spondylitis troubles, which she said were exacerbated by lying on the floor in jail because she wasn't even given a 'chataai' to sleep on, were brought to the authorities' attention during her medical test after her detention.
Image Courtesy: Twitter @LiveLawIndia